Here we provide NCERT Solutions for Class 9 MathsChapter 10 – Circles for English medium students, Which will very helpful for every student in their exams. Students can download the latest NCERT Class 9 Maths solution Chapter 10 pdf. Now you will get step by step solution to each question.

2. If two equal chords of a circle intersect within the circle, prove that the segments of one chord are equal to corresponding segments of the other chord.

3. If two equal chords of a circle intersect within the circle, prove that the line joining the point of intersection to the centre makes equal angles with the chords.

Given,
AB and CD are chords intersecting at E.
AB = CD, PQ is the diameter.
To prove,
∠BEQ = ∠CEQ
Construction,
OM ⊥ AB and ON ⊥ CD. OE is joined.

6. A circular park of radius 20m is situated in a colony. Three boys Ankur, Syed and David are sitting at equal distance on its boundary each having a toy telephone in his hands to talk each other. Find the length of the string of each phone. 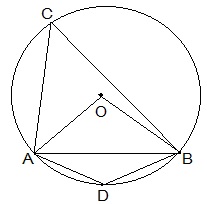 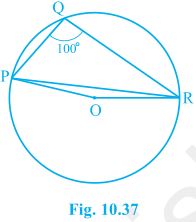 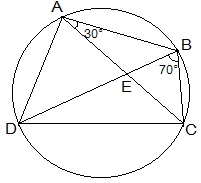 7. If diagonals of a cyclic quadrilateral are diameters of the circle through the vertices of the quadrilateral, prove that it is a rectangle.

Let ABCD be a cyclic quadrilateral and its diagonal AC and BD are the diameters of the circle through the vertices of the quadrilateral.

8. If the non-parallel sides of a trapezium are equal, prove that it is cyclic.

Given,
ABCD is a trapezium where non-parallel sides AD and BC are equal.
Construction,
DM and CN are perpendicular drawn on AB from D and C respectively.
To prove,
ABCD is cyclic trapezium.

9. Two circles intersect at two points B and C. Through B, two line segments ABD and PBQ are drawn to intersect the circles at A, D and P, Q respectively (see Fig. 10.40). Prove that ∠ACP = ∠QCD.

10. If circles are drawn taking two sides of a triangle as diameters, prove that the point of intersection of these circles lie on the third side.

Two circles are drawn on the sides AB and AC of the triangle ΔABC as diameters. The circles intersected at D.

D lies on BC. We have to prove that BDC is a straight line. 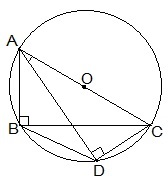 12. Prove that a cyclic parallelogram is a rectangle.

Given,
ABCD is a cyclic parallelogram.
To prove,
ABCD is rectangle.

All Subject NCERT Solutions For Class 9