On the other hand, the fatalists believed that everything was pre-determined. Pleasure and pain could not be altered, lessened or increased in the course of Samsara (transmigration). The materialists did not believe in alms or sacrifice or offerings. For them there was no such thing as this world or the next. A human being is made of four elements. When a human being dies the four elements; return to earth, water, fire and air.

Question 2.
Summarise the central teachings of Jainism.
Solution :
The main teachings of Jainism are as follows:
(i) The entire world is animated. Life exists even in rocks and stones normally considered non-living.
(ii) The principle of non-violence is practised in extreme form in Jainism. No harms should be caused to animals, plants and insects and any other living beings that may include rocks and stones too. This is notable that Jains are forbidden to eat late night lest they kill insects by mistake.
(iii) The cycle of birth and rebirth is shaped through Karma. If one is to escape this cycle of Karma, one must practise ascetism and penance. It is possible when one renounces the world. So one has to live in monastery to attain salvation.
(iv) Jain monks have to take vows to observe the following:
(a) Not to kill anyone
(b) Not to steal anything
(c) Not tell lies
(d) Not to possess property
(e) To observe celibacy.

Question 5.
Why do you think women and men joined the sangha?
Solution :
Women and men joined the sangha because within the sangha, all – workers, slaves, wealthy men, gahapatis and kings – were regarded as equal. It was an organisation of monks who could become teachers of dhamma. They shed their earlier social identities on becoming bhikkhus and bhikkhunis. Not only this, the internal functioning of the sangha was based on the traditions of ganas and sanghas where consensus was arrived at through discussions. If that failed, decisions were taken by a vote on the subject.

It is notable that Buddha used to roam around among people , preaching them on his teachings. However, he did not claim supernatural power. He told us that the world is ever changing. It is full of sorrows. Sorrow flows out of desire. Buddha asked the followers to take the middle path, not too much of penance, nor too much of indulgence. The literature of Buddhism is useful for the interpretation of the sculpture at Sanchi. People are shown in different moods and in sorrow. Different stages of life are depicted and so on. Hence, it can be stated that Buddhist literature throws valuable light on the sculptures of the Sanchi.

Question 7.
Figs A and B are two scenes from Sanchi. Describe what you see in each of them, focusing on the architecture, plants and animals, and the activities. Identify which one shows a rural scene and which an urban scene, giving reasons for your answer. 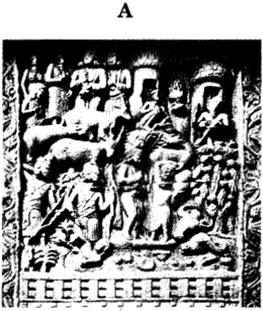 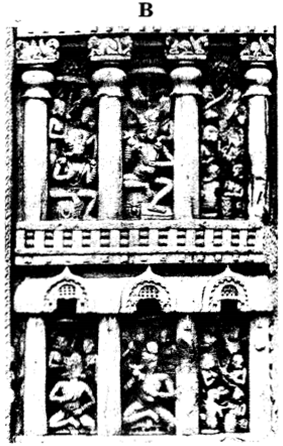 Question 8.
Discuss how and why stupas were built. Describe the structure of stupa with example.
Solution :
About 200 years after the time of Buddha King Asoka erected a pillar at Lumbini. This was to announce the visit of Buddha to this place.Stupas were the mounds put on the bodily remains of the body of Lord Buddha or of any object that was used by him. At the place of stupas such objects were buried. These were places of great respect under the tradition of Buddhism, as they had the relics of Buddha. As per the description of Asokavadana winch a famous Buddhist book, Emperor Asoka gave Buddha’s relic to all major cities. Later on such places stupas were put. The most important stupas are at Sanchi, Bharhut and Saranath.

The structure of a stupa was like a dome and hemisphere. On the top of it, there would be a balcony called harmik. This balcony represented the abode of God. The harmik was covered with an umbrella. There used to be railings around the balcony.

Question 9.
Discuss how and why stupas were built.
Solution :
(a) The stupas were built to bury the relics of Buddha such as his bodily remains or objects used by him. These were mounds known as stupas. Since they contained relics regarded as sacred, the entire stupa came to be venerated as an emblem of both the Buddha and Buddhism. According to Ashokavadana, Asoka distributed portions of the Buddha’s relics to every important town and ordered the construction of stupas over them.
(b)