Question 2.
Discuss the evidence that indicates planning and coordination on the part of the rebels.
Solution :
The rebellion was not abrupt and sporadic but to a great extent done with planning and care. This is brought out by the following points:

Question 4.
What were the measures taken to ensure unity among the rebels?
Solution :
A very important element of the revolt of 1857 was the unity shown by Hindus and Moslems in the struggle against the foreign rule. First the immediate cause of the rebellion was the use of cartridge greased with fat of cow and pig, angering Hindus and Moslems alike. After the rebels marched to Delhi, they declared the Mughal emperor Bahadurshah their all India leader. Thus, the Mughal emperor was the leader of Hindus and Muslems alike. Both Hindus and Muslims respected each others’ religious sentiments. Whenever a new area fell into the control of rebels, cow slaughter was made illegal to respect Hindu sentiments. Thus, Hindu-Muslim unity was the hallmark of the mutiny.

Question 6.
Why was the revolt particularly widespread in Awadh? What prompted peasants, taluqdars and zamindar to join the rebellion?
Solution :
The Mutiny of 1857 which was rebellions of the sepoys of the Company, turned into mass uprising in certain areas of the country. The most prominent was the area that was erstwhile part of the kingdom of Oudh. One report of the government says that 75 percent of men in Oudh were involved in the rebellion. Following are the main reasons why it took a mass uprising in that area:
1. Unceremonious removal of the Nawab: The nawab of Oudh Wazid Ali Shah was removed by Dalhosies on the pretext of poor governance. The removal was looked upon by the people as high handed and insult to them. The local people sympathized with the nawab. Thus, the public sentiment was against the British government that got a vent out during the revolt.

3. The agrarian unrest: There was strong anti-British sentiment in Oudh from the level of Talukdars to peasants. Talukdars were rich landlords collecting taxes and enforcing law and order. They enjoyed a lot of autonomy as long as they paid revenue to nawab. The talukdars faced the heavy hands of the British masters. Their autonomy ceased to exist. Their foot soldiers were disarmed and disbanded. The peasants were oppressed more as hardships engulfed the Talukdars. Peasants were over assessed and forced to pay higher taxes than in past.

4. Muslim Anger: The Muslems in North India looked upon British as snatcher of their empire. The Moslems thought themselves as natural rulers of India who were displaced from this position by the British. The Oudha which has the substantial Moslem population burst out against the Company’s rule when it got an opportunity viz. the mutiny of 1857. In fact the then government of East India Company described the mass uprising of Oudh as Moslem conspiracy.

Question 7.
What did the rebels want ? To what extent did the vision of different social groups differ ?
Solution :
(a) The Azamgarh Proclamation of 25 August, 1857 is the main source of information about what the rebels wanted. The objects mentioned in this Proclamation are as given below :

(b) Besides the objects mentioned in the Azamgarh Proclamation, the other objects of the rebels were as follows :

(c) From above it is clear that the vision of different groups differed from each other according to their problems. But on the whole they were against the British rule and wanted to get rid of it.

Thus, the paintings and other visual representation tell us about the feeling of the people in India and Britain.

(b) The historians consider these pictorial images produced by the British as well as by the Indians an important source of information about the feelings and reaction of the people at that time. These images reflect the public opinion which influenced the policies of the British government. On the other hand, the national imageries depict the national feelings of the Indians.

Question 9.
Examine any two sources presented in the chapter, choosing one visual and one text, and discuss how these represent the point of view of the victor and the vanquished.
Solution :
(a) 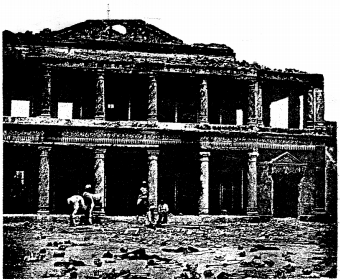 The above picture shows Secundrah Bagh, Lucknow. This place was once the pleasure garden which was built by Nawab Wajid Ali Shah. After the rebellion, the British forces led by Cambell killed 2000 rebel sepoys who held the place in 1857. The skeleton strewn on the ground are meant to be a cold warning of the futility of rebellion. This shows that in Awadh where according to an estimate three-fourths of adult male population was in rebellion, too could not succeed and were under control in March 1858.

(b) Villagers as rebels
An officer reporting from rural Awadh (spelt as Oude in the following account) noted : The Oude people are gradually pressing down on the line of communication from the North … the Oude people are villagers … these villagers are nearly intangible to Europeans melting away before them and collecting again. The Civil Authorities report these villagers to amount to a very large number of men, with a number of guns.’

The above source depicts the way in which villagers in Awadh fought with the British forces. They could not be defeated easily because they used to melt away before the British but soon after they collected again. Thus, it was very difficult for the British to control them. The fighting in Awadh continued till March 1858. This shows that in Awadh the rebellion was spread. On the other hand, it shows that inspite of difficulties, the British were determined to suppress the rebellion. The forces were used on a gigantic scale and ultimately Awadh was brought under control.