Question 2.
How do archaeologists trace socio-economic differences in Harappan society? What are the differences that they notice?
Solution:
Following examples can be cited to show the existence of social and economic variations : in the Harappan society:
(i) Study of burials is one example. In the Harappan sites, the deads were usually laid in pits. There were differences in the Way burial pits were made. At some instances, the hollowed-out spaces were lined with bricks. But these may not be taken as an indication of social differences.
(ii) In some graves pottery and ornaments have been found. Jewellery has been found from the graves of men and women as well. These findings can point out social and economic differences. ‘
(iii) The artefacts have been classified into two categories, Utilitarian and Luxurious. Objects of daily uses and objects made of ordinary materials made of clay or stone come under utilitarian category. Ordinary articles consisted of querns, pottery, flesh-rubbers and needles. These have been found distributed throughout settlements.
(iv) Objects of luxuries were rare and made from precious, non-local materials. The technology used was advanced and complicated. Little pots of faience were considered precious. They were also not easy to make. These show the existence of social and economic variations in the Harappan society.

Question 5.
Look at figure and describe what you see. How is the body placed? What are the objects placed near it? Are there any artefacts on the body? Do these indicate the sex of the skeleton?
Solution :
(a) A dead body has been laid in a pit.
(b) Some objects of pottery are placed near it.
(c) There seems to be some ornaments on body but these do not indicate the sex of the skeleton because jewellery has been found in burials of both men and women. 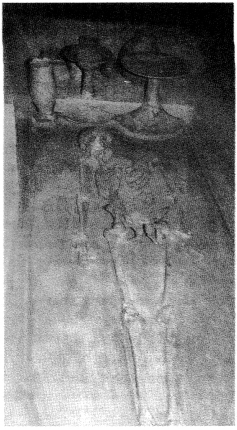 Question 6.
Describe some of the distinctive features of Mohenj odaro.

Describe the features that justify that Mohenjodaro was a planned urban cetnre.
Solution :
Some of the distinctive features of Mohenjodaro were as given below :

Question 7.
List the raw materials required for craft production in the Harappan civilisation and discuss how these might have been obtained.
Solution :

Another way of obtaining raw material was sending expeditions to different places.
Evidences show that expedition was sent to Khetri region of Rajasthan for copper and to South India for Gold. Through these expeditions local communities were contacted. Harappan evidences found at these places indicate contacts between each other. Evidences found at Khetri region were given the name of Ganeshwar Jodhpura Culture by archaeologists. Huge reserves of copper products were found here. It is assumed that inhabitants of these area sent copper to Harappan people.