The NCERT Solutions for Class 12 Chemistry Chapter 8 provides in-depth details of d and f blocks elements. The students are advised to refer to these solutions for better results.

Question 1.
Silver has completely filled d-orbitals (4d10) in its ground state. How can you say that it is a transition metal ?
Answer:
Silver (Z = 47) belongs to group 11 of (7-block (Cu, Ag, Au) and its outer electronic configuration is 4d105s1. It shows + 1 oxidation state (4d10 configuration) in silver halides (e.g. AgCl). However, it can also exhibit + 2 oxidation state (4d9 configuration) in compounds like AgF2 and AgO. Due to the presence of half filled d-orbital, silver is a transition metal.

Question 2.
In the series Sc (Z = 21) to Zn (Z = 30), the enthalpy of atomisation of zinc is the lowest, i.e., 126 kJ mol-1. Why?
Answer:
In 3d series from Sc to Zn, all elements have one or more unpaired e-1 s except Zn which has no unpaired electron as its outer EC is 3d104s2. Hence, the intermetallic bonding is weakest in zinc. Therefore, enthalpy of atomisation is lowest.

Question 6.
Why is the highest oxidation state of a metal exhibited in its oxide or fluoride only?
Answer:
Oxygen and fluorine have small size and high electronegativity. Hence, they can oxidise the metal to the highest O.S.

Now, d4 → d3 transition is easier as compared to d6 → d5 transition because in the second case, an electron is removed from a paired orbital which is rather difficult. Therefore, Cr2+ is a stronger reducing agent than Fe2+.

Question 3.
Explain briefly how + 2 oxidation state becomes more and more stable in the first half of the first row transition elements with increasing atomic number.
Answer:
In all the elements listed, with the removal of valence 45 electrons (+2 oxidation state), the 3d-orbitals get gradually occupied. Since the number of the empty d-orbitals decreases or the number of unpaired electrons in 3d orbitals increases, the stability of the cations (M2+) increases from Sc2+to Mn2+.

Question 4.
To what extent do the electronic configurations decide the stability of oxidation states in the first series of the transition elements ? Illustrate your answer with an example.
Answer:
The presence of half filled or completely filled orbitals imparts stability to a particular element/ion. Greater the number of such orbitals, more will be the relative stability. For example, let us write the different oxidation states of Mn (Z = 25) along with the electronic configurations. Mn: [Ar] 3d54s2 ; Mn2+ ; [Ar] 3d5 , Mn3+ ; [Ar]3d4, Mn4+ ; [Ar] 3d3.

+2 oxidation state of the element is likely to be the most stable because the corresponding electronic configuration of Mn2+ is highly symmetrical (all the five 3d-orbitals are half filled).

(b) Variation in basic strength of hydroxides: The basic strength of oxides and hydroxides decreases from La(OH)3 to Lu(OH)2. Due to lanthanoid contraction, size of M3+ ions decreases and thus there is a corresponding increase in the covalent character in M—OH bond. The acidic strength which involves the cleavage of O—H bond follows the reverse trend i.e. it increases along the series.

(b)Enthalpy of atomisation may be defined as the amount of heat energy needed to break the metal lattice of a crystalline metal into free atoms. Greater the magnitude of lattice energy, more will be the value of enthalpy of atomisation. The transition metals have high enthalpies of atomisation because the metallic bonds present are quite strong due to presence of large number of half-filled atomic orbitals. For more details, consult text-part.

(d) The transition metals and their compounds are known for their catalytic activity. This activity is ascribed to their ability to adopt multiple oxidation states and to form complexes. Vanadium(V) oxide (in Contact Process), finely divided iron (in Haber’s Process), and nickel (in r Catalytic Hydrogenation) are some of the examples.Catalysts at a solid surface involve the formation of bonds between reactant molecules and atoms of the surface of the catalyst.

Question 12.
What are interstitial compounds ? Why are such compounds well known for transition metals ?
Answer:
Interstitial compounds are the compounds formed as result of the trapping of atoms of small elements like H, N, C, B etc. in the crystal lattices of certain metals. These are non-stoichiometric in nature and are neither ionic nor covalent. In fact, no proper bonds exist in the atoms of metals and non-metals involved in these compounds. Transition metals havetendency to form such compounds. A few examples are: TiC,
Mn4N, Fe3H, VH0·56, Vse0·98 and Fe0·94O etc.

Question 15.
Describe the oxidising action of potassium dichromate and write the ionic equations for its reaction with :
(a) iodide,
(b) iron (II) solution
(c) H2S.
Answer:

Question 16.
Describe the preparation of potassium permanganate. How does acidified permanganate solution react with :
(a) iron (II) solution
(b) SO2
(c) oxalic acid ?
Write the ionic equations for the reactions.
Answer:
Potassium permanganate is prepared on a large scale from the mineral pyrolusite, MnO2.
2MnO2 + 4KOH + O2 → 2K2MnO4 + 2H2O 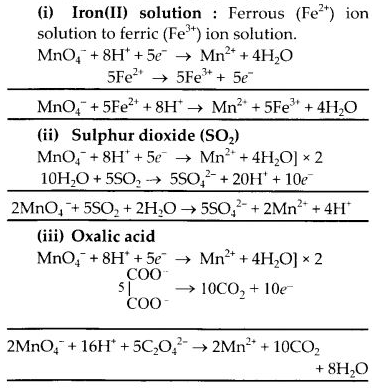 (c) Atomic and ionic sizes : The atomic size of lanthanoids decreases from lanthanum to lutetium. Though the decrease is not regular, in case of atomic radii, the decrease in the ionic size (M3+) is regular. Decrease in size between two successive elements is higher in actinoids due to poor screening by 5f electrons.

(d) Chemical reactivity: Actinoids are highly reactive metals especially when these are in the finely divided form. Upon boiling with water, they form respective oxides and hydroxides. They combine with a variety of non-metals at moderate temperature. On reacting with hydrochloric acid, they form their respective chlorides.

Question 30.
Which is the last element in the series of actinoids ? Write the electronic configuration of the element. Comment upon its possible oxidation state.
Answer:
Lawrencium (Lr = 103); [Rn] 5f146d17s2 oxidation state = +3.

(iii) Chemical reactivity: Actinoids are highly reactive metals especially when these are in the finely divided form. Upon boiling with water, they form respective oxides and hydroxides. They combine with a variety of non-metals at moderate temperature. On reacting with hydrochloric acid, they form their respective chlorides.

(ii) Oxidation state. The elements belonging to the different series but present in the same group have similar electronic configuration and therefore, exhibit almost same variable oxidation states. In general, these are maximum in the middle of the series while minimum towards the end. Transition elements show variable oxidation states due to the participation of ns and (n – 1) d electrons in bonding because the energies of ns and (n – 1) d-subshells are quite close. The stability of a particular oxidation state depends upon the nature of the element with which the transition metal forms the compound.

(iv) Atomic size. In all the three transition series, the atomic as well as ionic radii of the elements increase from left to the right. The values for 3d series are given in the text part. However, the increase in their values are not as much as expected since the shielding by (n – 1 )d electrons is not as much as expected. In a particular group, the atomic radius of the elements belonging to Ad series is more than the elements in the 3d series. However, the gaps in the elements belonging to Ad and 5d series are negligible on account of lanthanoid contraction which the elements of 5d experience.

For the explanation of the involvement of 3d orbitals in the hydrated ions (octahedral in nature) consult next unit on co-ordination compounds.

Question 38.
What can be inferred from the magnetic moment values of the following complex species ? 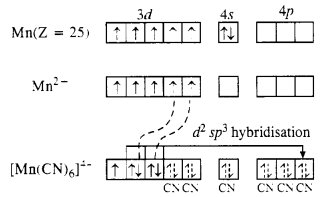 The complex is octahedral and is paramagnetic due to one unpaired electron.
(ii) [Fe(H2O)6]2+
Oxidation state of Fe : [Fe(H2O)6]2+ ; r + 6 (0) = +2
The magnetic moment value of 5·3 B.M. indicates that there are four unpaired electrons in the complex. This means that the electrons in Fe2+ ion do not pair up when six H20 molecules (or ligands) approach it. Since the desired number of vacant orbitals (six) are available, die complex formed is sp3d2 hybridised.

The complex is octahedral and is paramagnetic due to four unpaired electrons. It is also called outer orbital complex because 4d (n = 4) orbitals are involved.
(iii) K2[MnCl4]
Oxidation state of Mn : [MnCl4]2-, x + 4(-1) = -2 or x = -2 + 4= + 2
The magnetic moment value of 5·9 B.M. indicates that there are five unpaired electrons in the complex. This means that all the five 3d orbitals in Mn2+ ion are involved in the bond formation. The complex is sp3 hybridised in which one vacant 4s and three vacant 4p orbitals participate. 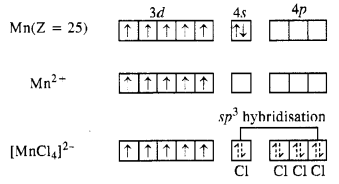 The complex is therefore, tetrahedral in nature.