NCERT Solutions for Class 12 Chapter 12 will help you revise the chapter during the examination. It also helps in clearing doubts if any.

Question 2.
Write the structures of products of following reactions: 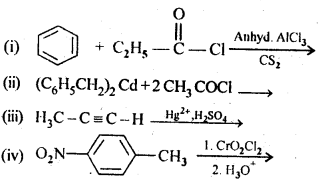 Explanation: We know that the boiling points of liquids are directly related to the magnitude of the intermolecular forces of attraction.

Question 4.
Arrange the following compounds in increasing order of their reactivity in nucleophilic addition reactions
(i) Ehtanal, propanaL, propanone, butanone
(ii) Benzaldehyde,p-Tolualdehyde, p-Nitrobenzaldehyde, acetophenone.
Ans: (i) Butanone < Propanone < Propanal < Ethanal .This is because as the no. of alkyl groups attached to carbonyl carbon increases, +I-effect increases. As a result, e– density 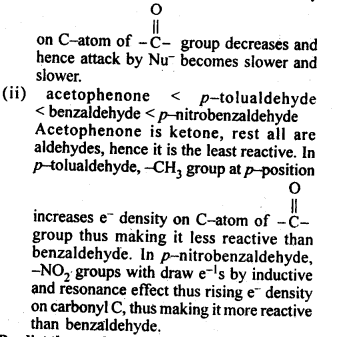 Question 5.
Predict the products of the following reactions : 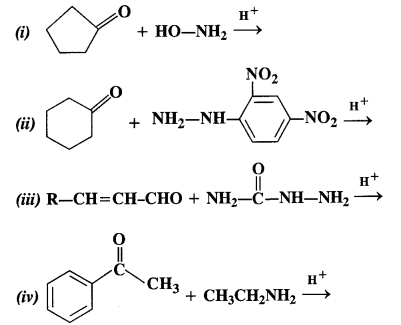 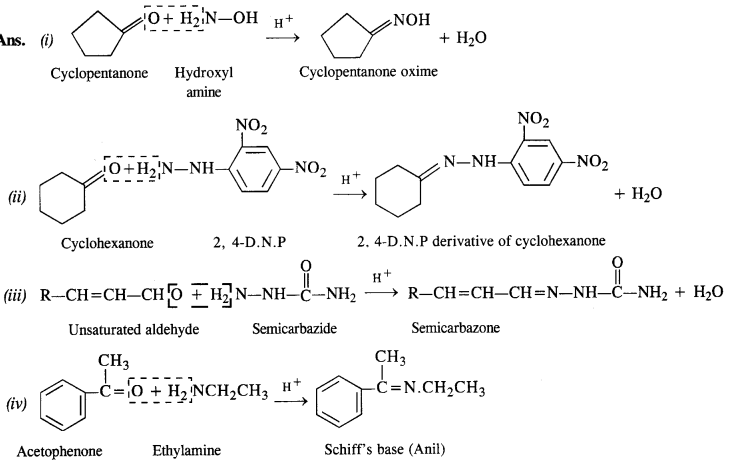 Question 6.
Give the IUPAC names of the following compounds: 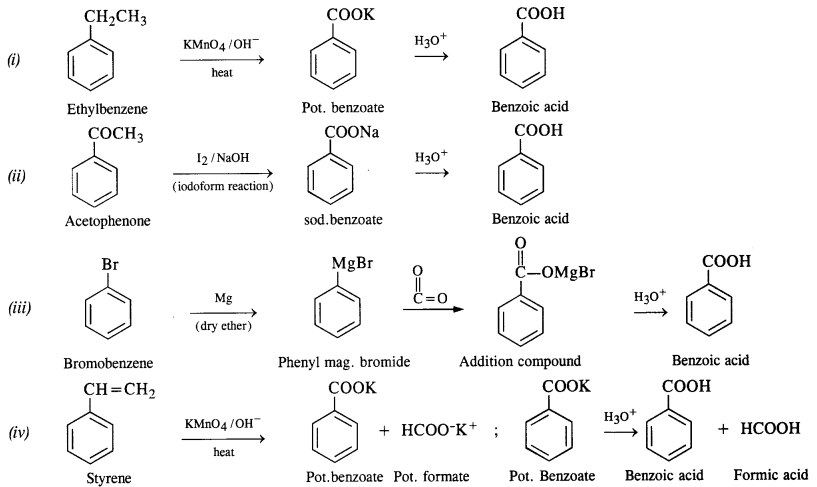 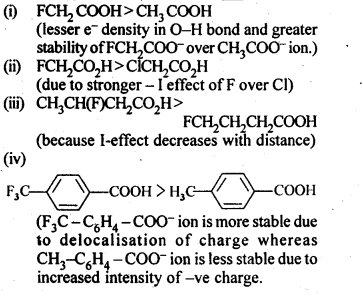 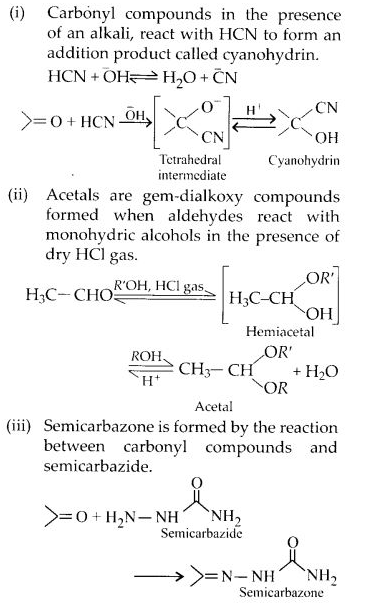 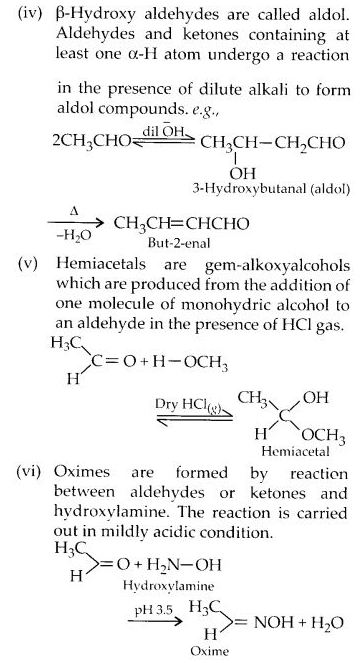 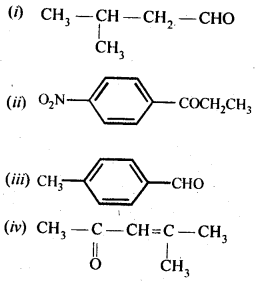 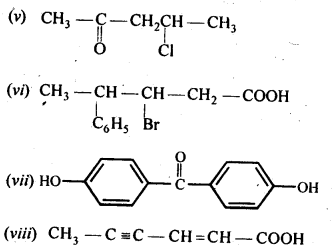 Question 4.
Write the IUPAC names of the following aldehydes and ketones. Also give the common names wherever possible. 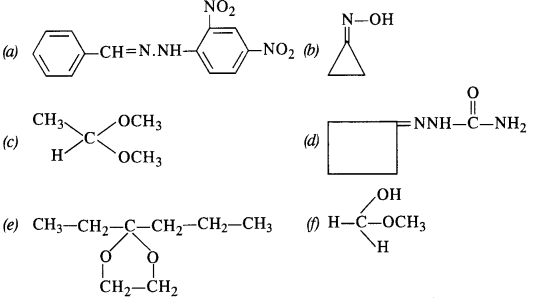 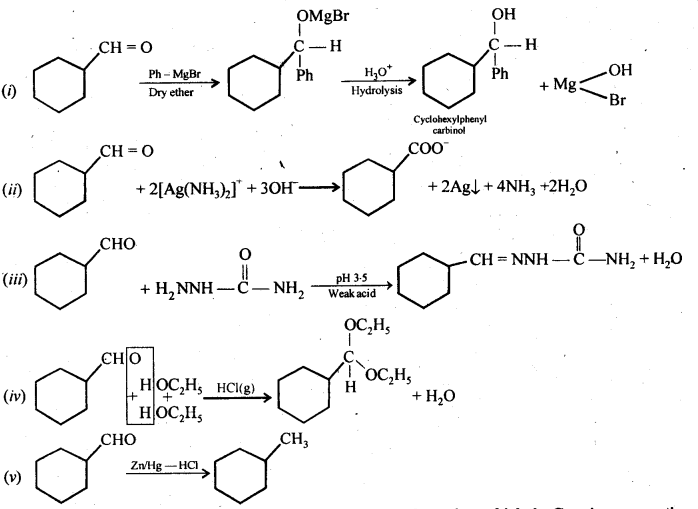 Question 7.
Which of the following will undergo Aldol condensation, which Cannizzaro’s reaction and which neither of these ? Write the structures of the expected products in each case

(iv) Benzophenone (C6H5COC6H5): It will not give any of the two reactions. Being ketone, it does not take part in Cannizzaro’s reaction. Without a-hydrogen, it fails to participate in Aldol condensation.

(viii) Butan-l-ol: It will not give any of the reactions.

(ii) Condensation involving butanal: It is self aldol condensation.

Question 10.
An organic compound with molecular formula CgHjoO forms 2, 4-DNP derivative, reduces Tollen’s reagent and undergoes Cannizzaro’s reaction. On vigorous oxidation, it gives 1, 2 benzenedicarboxylic acid. Identify the compound.      (C.B.S.E. Outside Delhi 2012; Haryana Board 2013)
Answer:
Since the compound forms 2, 4-DNP derivative on reacting with 2, 4-DNP, it is a carbonyl compound. As the compound reduces Tollen’s reagent and undergoes Cannizzaro’s reaction, it is an aldehyde and not a ketone. The data further reveals that the compound on vigorous oxidation gives 1, 2-benzenedicarboxylic acid. This clearly shows that in the compound which is of aromatic nature, CHO group is present at position-1 and C2H5 side chain at position-2. The given compound is 2-ethylbenzaldehyde. The reactions involved are given below : 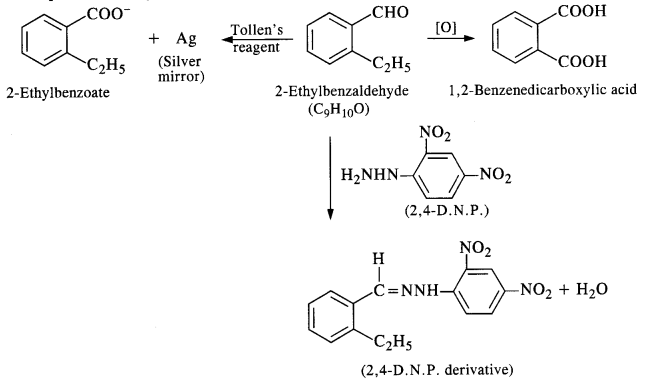 Question 11.
An organic compound [A] with molecular formula C8H16O2 was hydrolysed with dilute sulphuric acid to give a carboxylic acid [B] and an alcohol [C]. Oxidation of [C] with chromic acid produced [B]. The alcohol [C] on dehydration gave but-1-ene. Write equations for the reactions involved. (C.B.S.E. 2008 Supp., C.B.S.E. 2009)
Answer:
(i) The available data shows that the compound [A] upon hydrolysis gave a carboxylic acid [B] and an alcohol [C]. It must be an ester.
(ii) Since the alcohol [C] upon oxidation with chromic acid gave back the carboxylic acid [B], both the acid and alcohol must have the same number of carbon atoms (four each).
(iii) The alcohol [C] upon dehydration gave an alkene.
The equations for the reactions are given:

Question 12.
Arrange the following compounds in increasing order of their property as indicated:
(i) Acetaldehyde, Acetone, Di-tert butyl ketone, Methyl tert-butyl ketone (reactivity towards HCN)
(ii) CH3CH2CH(Br)COOH, CH3CH(Br)CH2COOH, (CH3)2CH COOH, CH3CH2CH2COOH (acid strength).
(iii) Benzoic acid, 4-Nitrobenzoic acid, 3,4-Dinitrobenzoic add, 4-Methoxybenzok acid (acid strength).
Answer: (i) The reactivity of aldehydes and ketones towards HCN addition decreases as the +1 – effect of the alkyl groups increases. Secondly, it decreases with increase in steric hindrance to the nucleophilic attack byCN– at the carbonyl carbon. Thus the decreasing order of reactivity towards HCN is,

(ii) We know that + I-effect decreases while -I-effect increases the acidic strength of carboxylic acids. Since + I-effect of isopropyl group is more than that of propyl group, therefore, (CH3)2CHCOOH is a weaker acid than CH3CH2CH2COOH. Further since -I-effect decreases with distance, therefore CH3CH2CHBrCOOH is a stronger acid than CH3CHBrCH2COOH. Thus, the overall acid strength increases in the order: 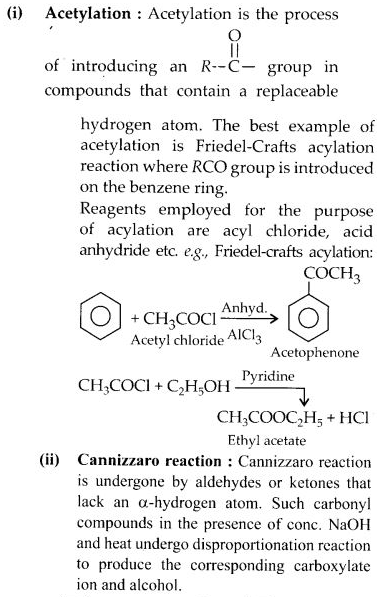 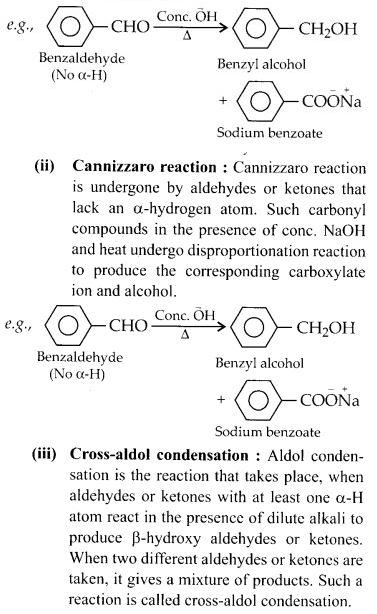 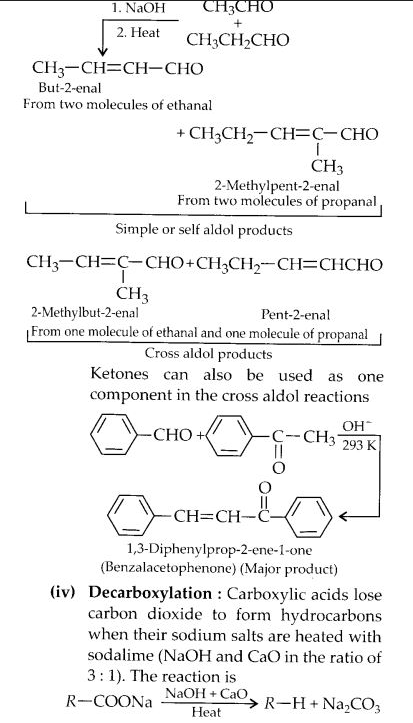 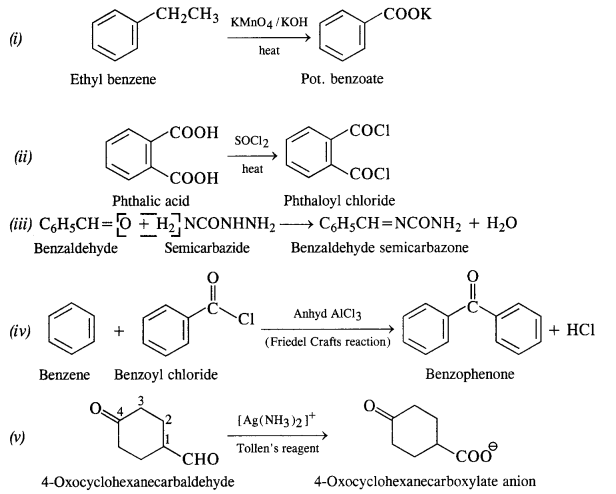 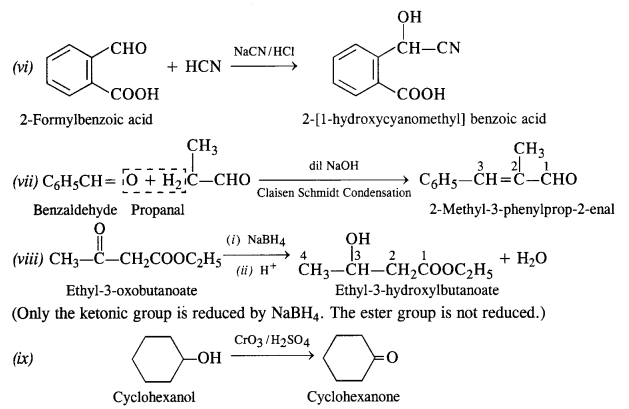 Question 18:
Give plausible explanation for each of the following :
(i) Cyclohexanone forms cyanohydrin in good yield but 2, 4, 6-trimethylcyclohexanone does not.
(ii) There are two – NH2 groups in semicarbazide. However, only one is involved in the formation of semicarbazone.
(iii) During the preparation of esters from carboxylic acid and alcohol in the presence of acid catalyst, the water or the ester should be removed as fast as it is formed.
Answer:

In cyclohexanone, the attack of CN“ ion (nucleophile) can easily take place at the carbonyl carbon atom. However, in 2, 4, 6-trimethylcyclohexanone, the three CH3 groups being electron releasing in nature (+ I effect) will considerably increase the electron density on the carbonyl carbon atom and the nucleophile attack does not seem to be feasible. Moreover, the two —CH3 substituents at the ortho positions will also hinder the attack of nucleophile CN– ion on the carbonyl group.

(ii) The structural formula of semi-carbazide is NH2NHCONH2. Although both the aminogroups have lone electron pair, but one of these is in conjugation with electron withdrawing carbonyl group and acquires positive charge. Therefore, it is not in a position to act as the nucleophile and only one -NH2 group is involved in the formation of semicarbazone.

(iii) The esterification carried in the presence of acid is of reversible nature and the reverse reaction is called ester hydrolysis.

In order that the reaction may proceed in the forward direction, ester or water formed in the reaction must be removed. Sulphuric acid added in esterification helps in removing molecules of H20 as it is a dehydrating agent.

Step II. Predicting the structure of the compound

Keeping in view these characteristics, the compound is CH3CH2CH2COCH3 (Pentan-2-one).
All the reactions in which pentan-2-one participates, are given for the benefit of the students.

Question 20:
Although phenoxide ion has more number of resonating structures than carboxylate ion, carboxylic acid is a stronger acid than phenol. Why ?
Answer: 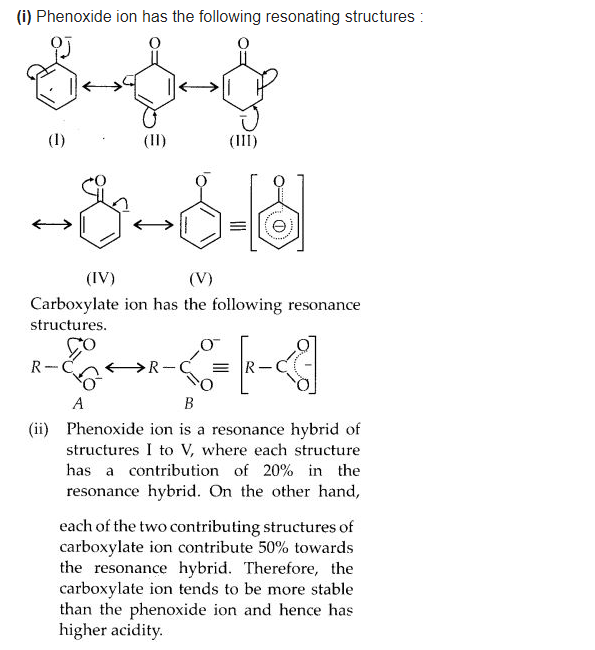