The chapter also explains the correlation between haloalkanes and haloarenes. NCERT Solutions for Class 12 Chapter 10 acts as a guide for the students preparing this chapter. The students can refer to these for better practice. 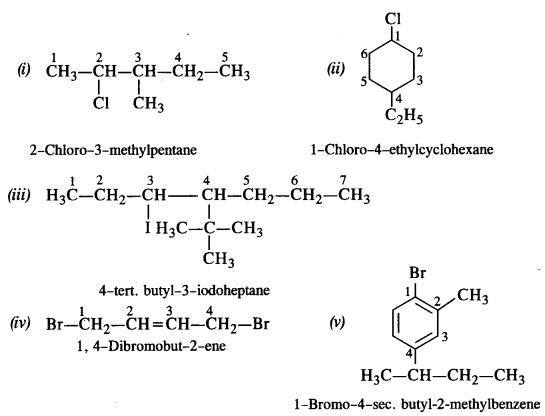 (i) The isomer is symmetrical with four primary (1°) carbon atoms and one quaternary (4°) carbon atom. Since all the hydrogen atoms are equivalent, it will yield only one monochloride upon photochlorination i.e., chlorination carried in the presence of ultra-violet light.

(ii) In the straight chain isomer pentane, there are three groups of equivalent hydrogen atoms. As a result, three isomeric monochlorides are possible.

(iii) The branched chain isomer has four types of equivalent hydrogen atoms present. It will give four isomeric monochlorides upon chlorination.

Question 5.
Draw the structures of the major monohaloproducts in each of the following reactions: 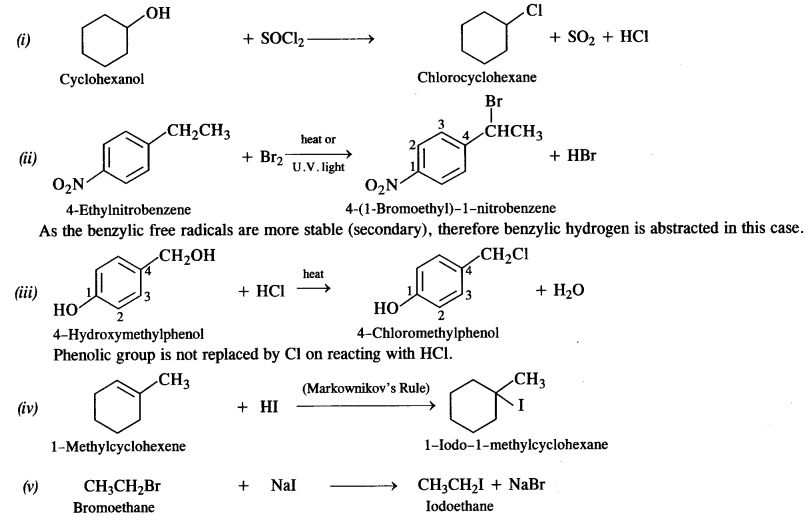 The reaction is carried in the presence of dry acetone upon heating. It is called Finkelstein reaction. In this reaction, I– ion being a stronger nucleophile displaces Br– ion. NaBr formed is insoluble in dry acetone whereas Nal dissolves. This shifts the equilibrium in the forward direction.

Under the reaction conditions allylic halogenation will take place. Addition of bromine can be possible in case the reaction is carried at room temperature.

Question 7.
Which alkyl halide from the following pairs would you expect to react more rapidly by SN² mechanism ? Explain your answer.

Answer:
The reactivity of a particular halogen compound towards SN¹ reaction depends upon the stability of the carbocation formed as a result of ionisation. This is a slow step and is called rate determining step. The order of relative stabilities of different carbocations is in the order : tertiary > secondary > primary. In the light of this, the order of reactivity in the two cases is explained. 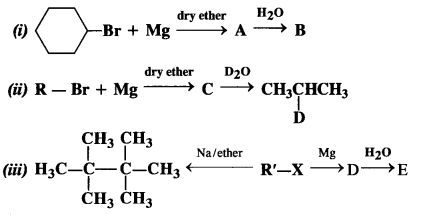 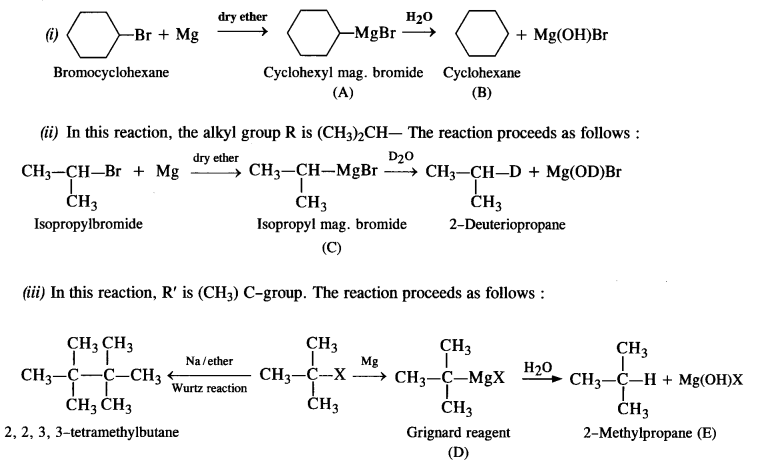 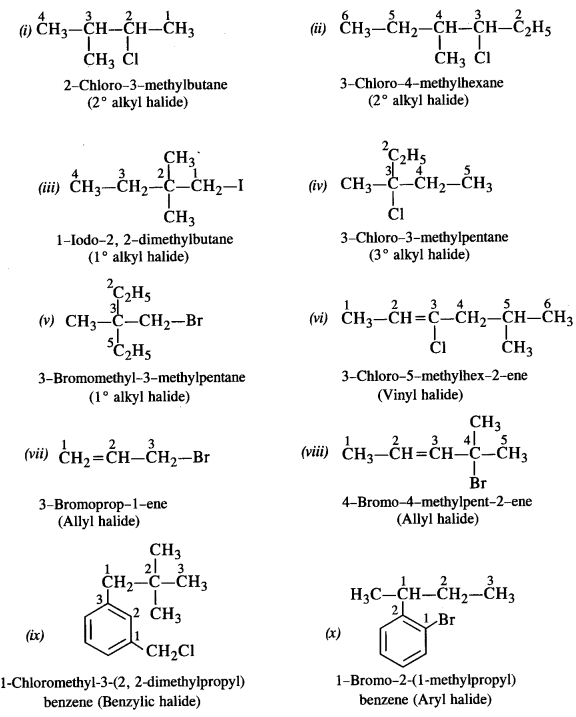 Question 2.
Give the IUPAC names of the following compounds : 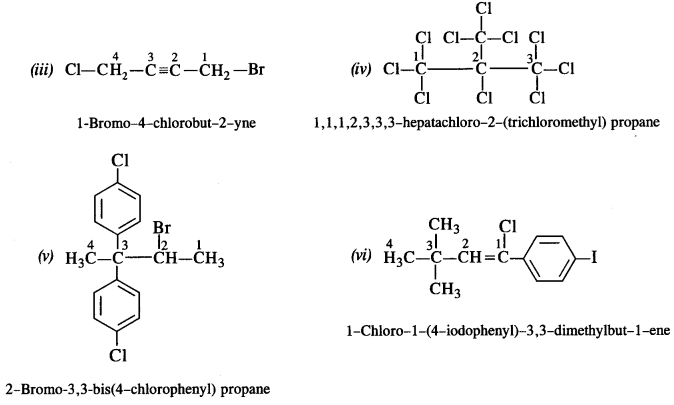 Question 6.
Write the isomers of the compound having the formula C4H9Br. (Haryana Board 2013)
Answer:
The compound has the following structural isomers.

2-Bromobutane has a chiral carbon and it is expected to exhibit optical isomerism.

through carbon to form cyanides (or nitriles) or through nitrogen to form isocyanides (or carbyl amines). For more details, consult section 11.7.

Question 9.
Which compound in the following pairs will react faster in Sn2 reaction?
(a) CH3Br or CH3I
(b) (CH3)3CCl or CH3Cl (C.B.S.E. 2008)
Answer:
(a) CH3– I will react faster than CH3– Br because I ion is a better leaving group than Br– ion. Alternatively, bond dissociation entbalpy of C- I bond is less than that of C – Br bond.
(b) CH3Cl will react faster because of less steric hindrance as compared to (CH3)3CCl

Question 10.
Predict all the alkenes that would be formed by dehydrohalogenation of following alkyl halides with sodium ethoxide in ethanol.
(i) 1-Bromo-l-metbylcyclohexane
(ii) 2-Chloro-2-methyl butane
(iii) 3-Bromo-2, 2, 3-trimethylpentane.
Answer:
(i) 1-Bromo-l-methylcyclohexane has two β-bydrogen atoms. This will give a mixture of two alkenes as a result of dehydrohalogenation. Since alkene (B) is more substituted according to SaytzefFs rule, it is more stable and will be the major product. The same rule applies to the other alkyl halides also.

Question 11.
How will you bring about the following conversions?   (Haryana Board 2011)
(i) Ethanol to but-1-yne
(ii) Ethane to bromoethane
(iii) Propene to 1-nitropropane
(iv) Toluene to benzyl alcohol
(v) Propene to propyne
(vi) Ethanol to ethyl fluoride
(vii) Bromometbane to propanone
(viii) But-1-ene to but-2-ene
(ix) 1-Chiorobutane to n-octane
(x) Benzene to biphenyl
Answer: 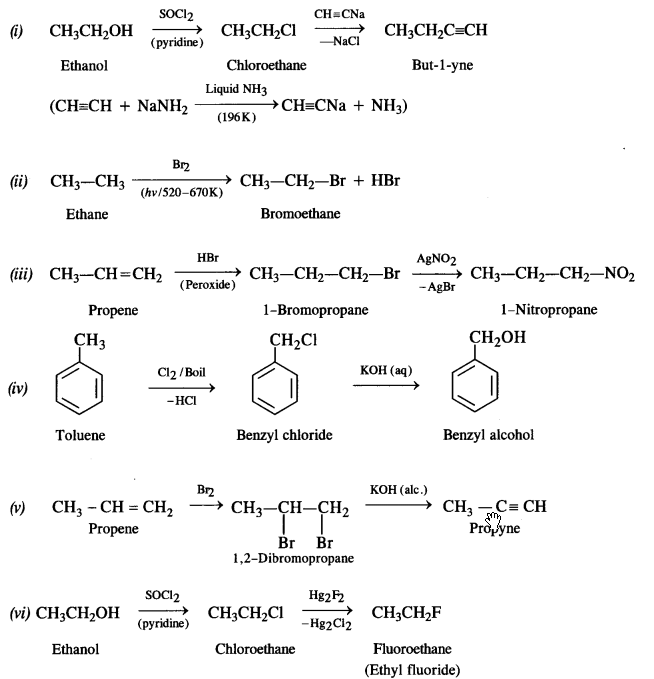 Question 12.
Explain why:
(i) Dipole moment of chlorobenzene is lower than that of cyclohexylchloride (C.B.S.E 2016)
(ii) Alkyl halides though polar, are immiscible with water.
(iii) Grignard reagents should be prepared under anhydrous conditions.
Answer:

(ii) In water, H2O molecules are linked to each other by intermoleculer hydrogen bonding. Although alkyl halides also contain polar C – X bonds, they cannot break the hydrogen bonding in H20 molecules. This means that there is hardly any scope for association between molecules of alkyl halides and water. They therefore, exist as separate layers and are immiscible with each other. For more details, consult section 11.6.

(iii) Grignard reagents (R – Mg – X) should be prepared under anhydrous conditions because these are readily decomposed by water to form alkanes.

That is why ether used as solvent in the preparation of Grignard reagent is completely anhydrous in nature.

Question 13.
Give the uses of freon-12, D.D.T., carbon tetrachloride and iodoform ?
Answer:

Question 14.
Write the structures of the major products in each of the following reactions : 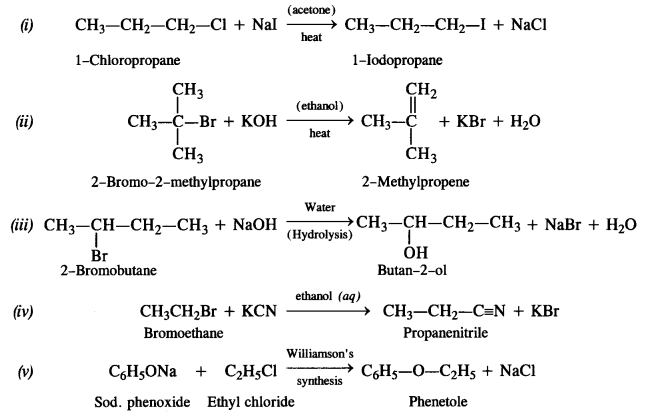 Answer:
KCN is a resonance hybrid of two contributing structures : 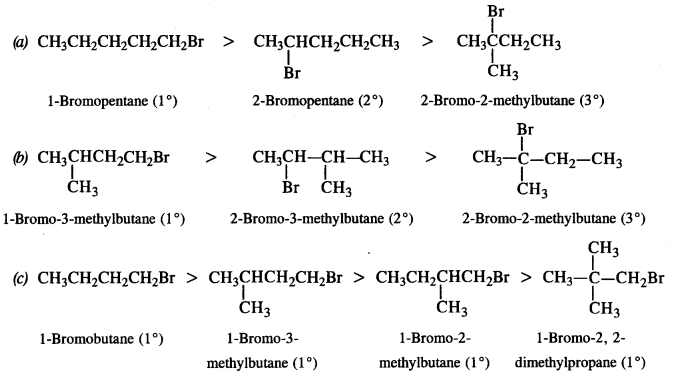 Question 17.
Out of  C6H5CH2Cl and C6H5CH(C1)C6H5 which is more easily hydrolysed by aqueous KOH ?
Answer:
The compound C6H5CH2Cl is a primary aralkyl halide while C6H5CH(Cl)C6H5 is secondary in nature. The hydrolysis of both these compounds with aqueous KOH (polar) is likely to proceed by SN¹ mechanism due to following reasons.
(a) The carbocations formed in both the cases as a result of ionisation are resonance stabilised due to the presence of phenyl groups at the a-position(s).
(b) As water is a polar solvent, it is expected to favour ionisation of the two halogen substituted compounds leading to SN¹ mechanism.
The carbocations that are formed as a result of ionisation in the slow steps are shown : 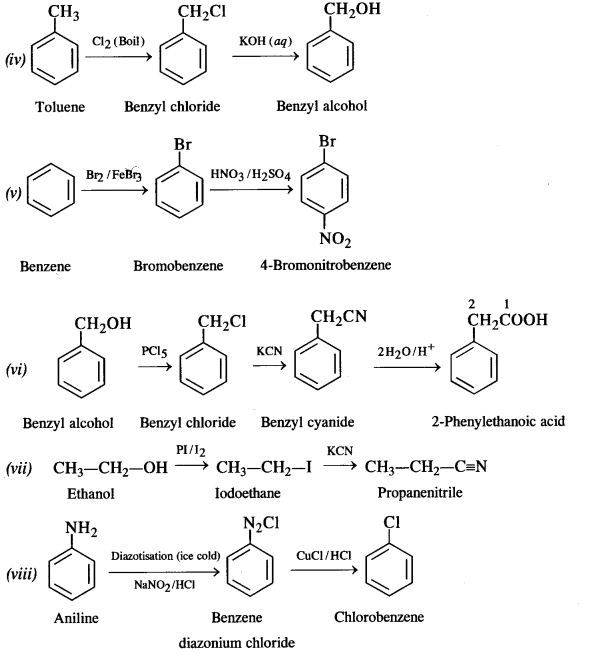 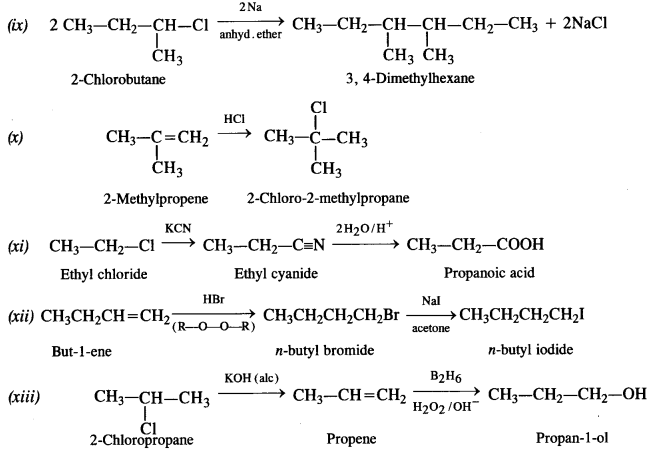 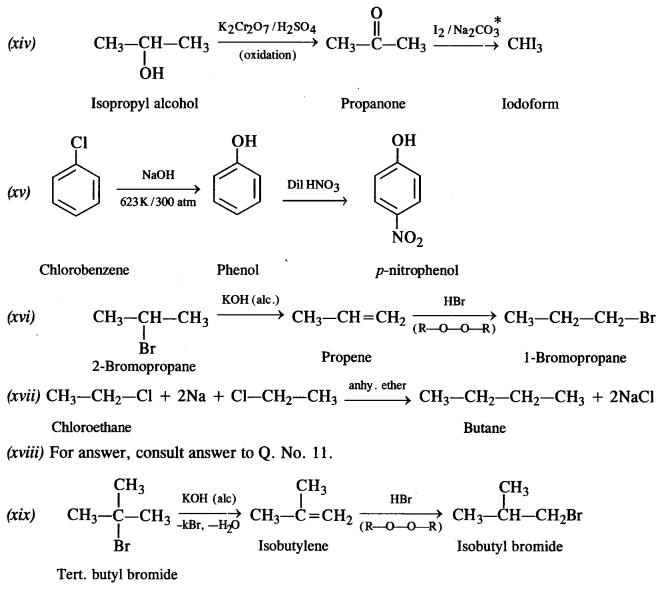 Question 20.
The treatment of alkyl chlorides with aqueous KOH leads to the formation of alcohols but in the presence of alcoholic KOH, alkenes are major products. Explain.
Answer:
If aqueous solution, KOH is almost completely ionized to give OH– ions which being a strong nucleophile brings about a substitution reaction on alkyl halides to form alcohols. Further in the aqueous solution, OH– ions are highly solvated (hydrated). This solvation reduces the basic character of OH– ions which, therefore, fails to abstract a hydrogen from the P-carbon of the alkyl chloride to form alkenes. In contrast, an alcoholic solution of KOH contains alkoxide (RO–) ion which being a much stronger base than OH– ions preferentially eliminates a molecule of HCl from an alkyl chloride to form alkenes.

According to the available information, the isomer (I) does not represent the correct compound because this on reacting with sodium metal (Wurtz reaction) will give n-octane. (C8H18) which is not acutally formed

(ii) Phenyl magnesium bromide (Grignard reagent) is formed as a result of the reaction.

(iii) Chlorobenzene will not get hydrolysed on boiling with NaOH. No product will be formed.
(iv) Ethyl alcohol is formed as the product

(v) Ethane is formed as a result of Wurtz reaction