Question 1.
Fill in the blanks
(a) Plants are called as ___ because they fix carbon dioxide.
(b) In an ecosystem dominated by trees, the pyramid (of numbers) is ___ type.
(c) In aquatic ecosystem, the limiting factor for the productivity is ___
(d) Common detritivores in our ecosystem are ____
(e) The major reservoir of carbon on earth is ___
Solution:
(a) producers
(b) inverted or spindle
(c) light
(d) saprotrophs
(e) oceans

Question 2.
Which one of the following has the largest population in a food chain?
(a) Producers
(b) Primary consumers
(c) Secondary consumers
(d) Decomposer’s
Solution:
(d) decomposer’s

(b) Differences between upright and inverted pyramids are as follows :

(c) Differences between litter and detritus are as follows :

(d) Differences between production and decomposition are as follows :

(e) Differences between food chain and food web are as follows:

Question 7.
Describe the components of an ecosystem.
Solution:
The components of an ecosystem can be divided into two categories: biotic and abiotic.
(i) Biotic components:
(i) Producers – Green plants which can synthesize their own food.
(ii) Consumers – They do not synthesize their food. They may be
-Primary consumer/herbivores – consuming plants as food.
-Secondary and tertiary consumers or carnivores – They feed on either herbivores or carnivores.
(iii) Decomposers – These organisms breakdown the dead bodies or waste products of plants and animals into simpler inorganic compounds.
(2) Abiotic components:
(i) Climatic components
•Light
•Temperature
•Wind
•Atmospheric gases
•Rain
•Atmospheric humidity
(ii) Soil factors
•Organic materials
•Minerals
•Soil, water
•Soil air
(iii) Topographic factors
•Altitude
•Direction and steepness slope

There are three types of ecological pyramids, namely,

Pyramid of numbers : It is a graphic representation of the number of individuals per unit area of various trophic levels stepwise with producers at the base and top carnivores at the tip. In a grassland the producers, which are mainly grasses, are always maximum in number. This number then shows a decrease towards apex, as the primary consumers (herbivores) like rabbits, mice etc. are lesser in number than the grasses; the secondary consumers, snakes and lizards are lesser in number than the rabbits and mice. Finally, the top (tertiary) consumers hawks or other birds, are least in number. Thus, the pyramid becomes upright. 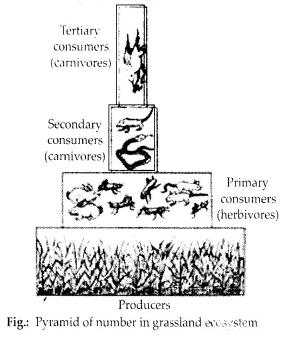 Pyramid of biomass : The amount of living organic matter (fresh and dry weight) is called biomass. Here, different trophic level of the ecosystem are arranged according to the biomass of the organisms. In grassland and forest, there is generally a gradual decrease in biomass of organisms at successive levels from the producers to the top carnivores. Thus these pyramids are upright. But in pond ecosystem, it is inverted because the biomass gradually increases from the producers to carnivores. 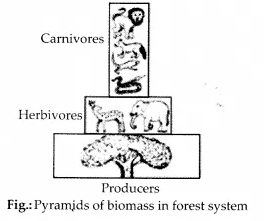 Question 11.
Give an account of energy flow in an ecosystem.
Solution:
Ecosystem require a constant input of energy as every component of an ecosystem is regularly dissipating energy.

Energy flow in an ecosystem is always unidirectional or one way, i.e., solar radiations —> producers —> herbivores —> carnivores. It cannot pass in the reverse direction. There is decrease in the content and flow of energy with the rise in trophic level. Only 10% of energy is transferred from one trophic level to the next.
Producer biomass (1000 K cal) —> Herbivore biomass (100 K cal) —> Carnivore I biomass (10 K cal) Carnivore II biomass (1 K cal) 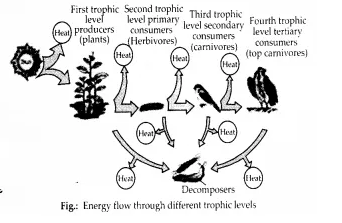 Question 12.
Write important features of a sedimentary cycle in an ecosystem
Solution:
In sedimentary cycle materials involved in circulation between biotic and abiotic components of biosphere are non-gaseous and the lithosphere is the reservoir pool, e.g., phosphorus, calcium and magnesium. Sulphur has both sedimentary and gaseous phases. Sedimentary cycles are slow and less perfect as compared to gaseous cycles.

Question 13.
Outline salient features of carbon cycling in an ecosystem.
Solution:
Carbon constitutes 49 percent of dry weight of organisms and is next only to water. 71 percent carbon is found dissolved in oceans. This ocean reservoir regulates the amount of carbon dioxide in the atmosphere. Fossil fuels also represent a reservoir of carbon. Carbon cycling occurs through atmosphere, ocean and through living and dead organisms. 4 x 1013 kg of carbon is fixed in the biosphere through photosynthesis annually. A considerable amount of carbon returns to the atmosphere as Co2 through respiratory activities of the producers and consumers. Decomposers also contribute substantially to Co2 pool by their processing of waste materials and dead organic matter of land or oceans. Some amount of fixed carbon is lost to sediments and removed from circulation. Burning of wood, forest fire and combustion of organic matter, fossil fuels, volcanic activity are additional sources for releasing Co2 in the atmosphere. 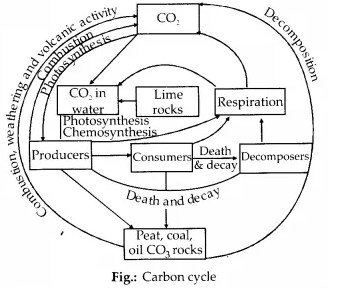