Question 1.
Crystals of Bt toxin produced by some bacteria do not kill the bacteria themselves because
(a) bacteria are resistant to the toxin
(b) toxin is immature
(c) toxin is inactive
(d) bacteria encloses toxin in a special sac.
Solution:
(c) : Bacillus thuringiensis forms protein crystals during a particular phase of their growth. These crystals contain a toxic insecticidal protein. Actually, the Bt toxin protein exist as inactive protoxins but once an insect ingests the inactive toxin, it is converted into an active form of toxin due to the alkaline pH of the insect gut which solubilise the crystals. The activated toxin binds to the surface of midgut epithelial cells and creates pores that cause cell swelling and lysis and eventually cause death of the insect, but it does not harm Bacillus itself.

Question 2.
What are transgenic bacteria? Illustrate using any one example.
Ans: Bacteria carrying foreign gene are called transgenic bacteria. For example, two DNA sequences (A and B chains of human insulin) were introduced into the plasmid ofbacteria E.coli. The leansgenic bacteria start producing insulin chains.

Transgenic crops have several disadvantages also which are mentioned below:

Question 4.
What are Cry proteins? Name an organism that produce it. How has man exploited this protein to his benefit?
Solution:
Cry proteins are protein responsible for killing lepidopteran insect and their larvae (also called Bt toxin). It is secreted by Bacillus thuringienesis. Man exploited gene encoding this toxin, by transferring it into cotton genome with the help of Agrobacterium TDN A as vector.

To perform gene therapy, lymphocytes are extracted from the patient’s bone marrow and a normal functional copy of human gene coding for ADA is introduced into these lymphocytes with the help of retroviral vector. The cells so treated are reintroduced into the patient’s bone marrow. The lymphocytes produced by these cells contain functional ADA gene which reactivates the victim’s immune system. But, as these lymphocytes do not divide and are short lived, so periodic infusion of genetically engineered lymphocytes is required. This problem can be overcome, if stem cells are modified at early embryonic stage. 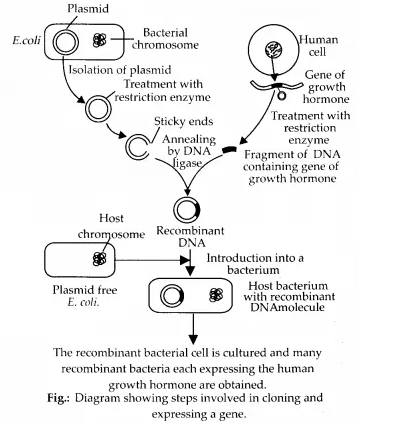 Question 7.
Can you suggest a method to remove oil (hydrocarbon) from seeds based on your understanding of rDNA technology and chemistry of oil?
Solution:
rDNA technology is a technique of genetic engineering that involves combining DNA from two different sources to produce a recombined or recombinant DNA (rDNA). Oils are composed of glycerol and fatty acids. Thus, to produce oil-free seeds genes coding for glycerol or fatty acids should be identified and nucleotide sequence complementary to the sequence of these genes should be inserted adjacent to these genes in the early cells of the endosperm. During transcription, these complementary sequences will produce anti-sense RNAs to the RNAs produced by glycerol or fatty acids gene and will silence these genes. As a result, oil free seeds will be produced.

Since, glycerol is a common component of all the oils whereas various fatty acids combine with glycerol to form oils, thus it will be easier if we silence the gene for glycerol synthesis.

Question 8.
Find out from internet what is golden rice.
Solution:
Golden rice is transgenic rice having gene coding for vitamin A synthesis enzyme. Golden rice was developed by Swiss Federal Institute of Technology, rich in vitamin A (beta carotene). The rice grains are golden yellow in colour due to colour it gets from the beta carotene.

Question 9.
Does our blood have proteases and nucleases ?
Solution:
Proteases occur naturally in all organisms. These enzymes are involved in a multitude of physiological reactions from simple digestion of food proteins to highly-regulated cascades (e.g., the blood-clotting cascade, the complement system, apoptotic pathways, and the invertebrate prophenoloxidase-activating cascade). Proteases present in blood serum (thrombin, plasmin, Hageman factor, etc.) play important role in blood-clotting, as well as in lysis of the clots, and the action of the immune system. Other proteases are present in leucocytes (elastase, cathepsin G) and play several different roles in metabolic control. Nucleases, such as deoxyribonucleases and ribonucleases are found in blood which helps in degradation of exogenous deoxyribonucleic acid and ribonucleic acid circulating in blood.

Question 10.
Consult internet and find out how to make orally active protein pharmaceutical. What is the major problem to be encountered?
Solution:
Proteinaceous drugs cannot be taken orally because they can be degraded by the proteases of our alimentary canal. To counteract this problem or to make orally active protein pharmaceutical, it must be coated by a film that is resistant to protein degrading enzymes.