Question 1.
Make a chart (with diagrammatic representation) showing a restriction enzyme, the substrate DNA on which it acts, the site at which it cuts DNA and the product it produces.
Solution:
Restriction enzyme – Eco RI
Source – Escherichia coli RY13 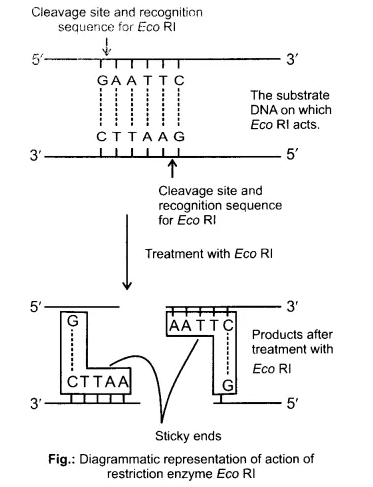 Question 3.
From what you have learnt, can you tell whether enzymes are bigger or DNA is bigger in molecular size? How did you know?
Solution:
Enzymes are bigger than DNA as they are proteins and proteins are macromolecules made of amino acids which are bigger than nucleotides. This can also be proved by gel electrophoresis, where denatured protein would not move but denatured DNA will move to a distance. Protein synthesis is regulated by small portions of DNA, called genes.

Question 4.
What would be the molar concentration of human DNA in a human cell? Consult your teacher.
Solution:
Molar concentration, is the ratio of the number of moles of solute in a solution divided by the volume of the solution expressed in litres.
Average weight of a DNA basepair = 650 daltons (1 dalton equals mass of a single hydrogen atom or 1.67 x 10-24 grams)
Molecular weight of a double stranded
DNA molecule = Total no. of basepairs x 650 daltons
The human genome is 3.3 x 109 bp in length.
Hence, the weight of human genome,
= 3.3 x 109 bp x 650 Da
= 3.59 x 10-12 gm.
The molar concentration of DNA can be calculated accordingly.

Question 5.
Do eukaryotic cells have restriction endonucleases? Justify your answer.
Solution:
Restriction enzymes also called ‘the molecular scissors’ are used to break DNA molecules. These enzymes are present in many bacteria where they function as a part of their defence mechanism called as restriction modification system. Molecular basis of this system was explained first by W. Arber in 1965. The restriction-modification system consists of two components;

Question 6.
Besides better aeration and mixing properties, what other advantages do stirred tank bioreactors have over shake flasks?
Solution:
Shake flasks are used for growing and mixing the desired materials on a small scale in the laboratory. Bioreactors are vessels in which raw materials are biologically converted into specific products by microbes, plant and animal cells and their enzvmes. Bioreactors are used for large scale production of biomass or cell products under aseptic conditions. Here large volumes (100-1000 litres) of culture can be processed. A bioreactor provides the optimal conditions for achieving the desired product by providing optimum growth conditions (temperature, pH, substrate, salts, vitamins, oxygen). The most commonly used bioreactors are of stirring type.

Question 7.
Collect 5 examples of palindromic DNA sequences by consulting your teacher. Better try to create a palindromic sequence by following base-pair rules.
Solution:
palindromes in DNA are base pair sequences that are the same when read forward (left to right) or backward (right to left) from a central axis of symmetry. For example, the following sequences read the same on the two strands in 5′–> 3′ direction as well as 3′ –> 5′ direction.

Question 8.
Can you recall meiosis and indicate at what stage a recombinant DNA is made?
Solution:
Meiosis I – Pachytene – When recombination nodule appear after synaptonemal complex formation.

Question 9.
Can you think and answer how a reporter enzyme can be used to monitor transformation of host cells by foreign DNA in addition to a selectable marker?
Solution:
Transformation is a process through which a piece of DNA is introduced into a host bacterial cell. Normally, the genes encoding resistance to antibiotics such as ampicillin, tetracycline, etc., are considered useful selectable markers to differentiate between transformed and non-transformed bacterial cell. In addition to these selectable markers, an alternative selectable marker has been developed to differentiate transformed and non-transformed bacterial cell on the basis of their ability to produce colour in the presence of a chromogenic substance. A recombinant DNA is inserted in the coding sequence of an enzyme (5-galactosidase (reporter enzyme). If the plasmid in the bacterium does not have an insert, the presence of a chromogenic substance gives blue coloured colonies, presence of insert results into insertional inactivation of (3-galactosidase and, therefore, the colonies do not produce any colour, these colonies are marked as transformed colonies.

(b) Bioreactors : These are vessels in which raw materials are biologically converted into specific products by microbes, plant and
animal cells and their enzymes. They are allowed to synthesise the desired proteins which are finally extracted and purified from cultures. Small volume cultures are usually employed in laboratories for research and production of less quantities of products. However, large scale production of the products is carried out in ‘bioreactors’. The most commonly used bioreactors is stirring type bioreactor (fermenter) that has a provision for batch culture or continuous culture.

Question 11.
Explain briefly
(a) PCR
(b) Restriction enzymes and DNA
(c) Chitinase
Solution:
(a) Polymerase chain reaction (PCR) is a technique of synthesizing multiple copies of the desired gene (DNA) in vitro. This technique was developed by Kary Mullis in 1985. It is based on the principle that a DNA molecule, when subjected to high temperature, splits into two strands due to denaturation. These single stranded molecules are then converted to double stranded molecules by synthesising new strands in presence of enzyme DNA polymerase. Thus, multiple copies of the original DNA sequence can be generated by repeating the process several times. The basic requirements of PCR are, DNA template, two nucleotide primers usually 20 nucleotides long and enzyme DNA polymerase which is stable at high temperature (usually Taq polymerase):
Working mechanism of PCR is as follows:

(c) Chitinase is a lysing enzyme that dissolves the fungal cell wall. It results in the release of DNA along with several other macro molecules.

Question 12.
Discuss with your teacher and find out how to distinguish between:
(a) Plasmid DNA and chromosomal DNA
(b) Exonuclease and endonuclease
(c) RNA and DNA
Solution:
(a) Plasmid DNA is naked double stranded DNA that forms a circle with no free ends. It is associated with few proteins. It is smaller than the host chromosome and can be easily separated.
Chromosomal DNA is double stranded linear DNA molecule associated with large proteins. This DNA exists in relaxed and supercoiled forms and provides a template for replication and transcription. It has free ends.

(b) Differences between exonucleases and endonucleases are as follows :

(c) Differences between DNA and RNA are given in the following table: