Chapter 1 – Reproduction In Organism –  covers different exercises. The questions in each exercise come with the answer and a detailed, step-by-step solution for better understanding by the student. This will prove to be most helpful to students in their home assignments and practice. The topics and sub-topics included in the chapter are the following:

Question 3.
Why is the offspring formed by asexual reproduction referred to as clone?
Solution:
Asexual reproduction results in the production of offsprings which are morphologically and genetically similar to one another and are also exact copies of their parents. Such a group of individuals are called clones.

Question 4.
Offspring formed due to sexual reproduction have better chances of survival. Why? Is this statement always true?
Solution:
The offspring that are produced by sexual reproduction are not genetically identical to their parents. They exhibit variations because they receive chromosomes from two different parents. Since they show variation, they are highly adapted to the changing environment. Asexually produced organisms are genetically identical and all organism show similar adaptations. So, during any calamity, there is a possibility that the whole generation would destroy leading to extinction of species. However, this statement is not true always because of some inborn genetic disorder due to which organism have a risk in their survival, e.g., Haemophilia.

But in sexual reproduction, the individual is produced as a result of meiosis and gametic fusion, exhibit genetic variation and differ from either of the two parents as well as among themselves. 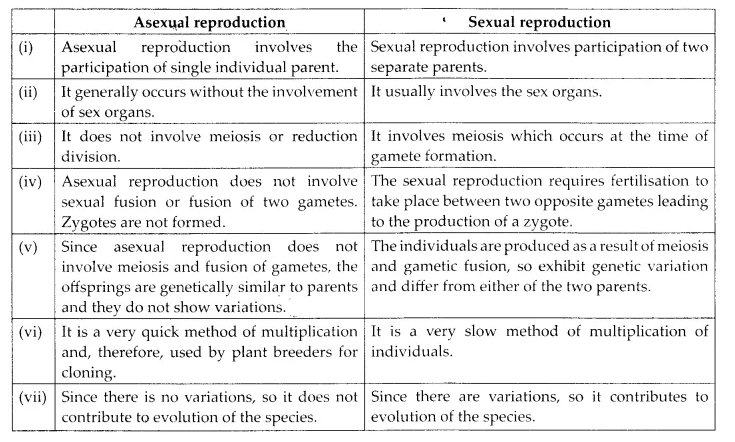 As vegetative reproduction does not involve two parents and any meiosis and syngamy so it is considered as a type of asexual reproduction. This term is used in case of plants.

Question 7.
What is vegetative propagation? Give two suitable examples.
Solution:
Vegetative propagation in plants is a method of asexual reproduction in which the parts other than seeds are used as propagules. In fact, it is a method of propagation in those plants which have lost their capacity to produce, seeds or produce non-viable seeds (e.g., Banana, seedless Grapes, Rose, Pineapple, etc.) Among flowering plants, every part of the body, such as root, stem, leaf or bud takes part in vegetative propagation. Modified tuberous roots can be propagated vegetatively when planted in soil (e.g., sweet potato).
Underground modified stems such as rhizomes (e.g., Ginger, Eichhornia or water hyacinth, etc.), corms (e.g., Colocasia, Banana, etc.), bulbs.(e.g., Garlic, onion, etc.), etc.

Question 11.
Identify each part in a flowering plant and write whether it is haploid (n) or diploid (2n).

The major disadvantage of this type of fertilization is that the offsprings are not protected from the predators and their survival is threatened upto adulthood. Moreover, a large number of gametes are wasted.

Question 13.
Differentiate between a zoospore and a zygote.
Solution:
Zoospores are Ihe microscopic, flagellated (motile)
special asexual reproductive structures found in certain members of the kingdom fungi and simple plants like algae whereas zygote is a diploid cell formed by die fusion of male and female gametes. The zygote is usually nonflagellated.
Zoospores are the structures that give rise to new organism whereas zygote is formed after fertilization which develops into a mature organism. 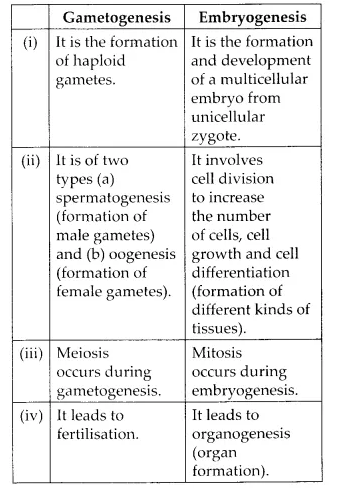 Question 15.
Describe the post-fertilization changes in a flower.
Solution:
After fertilization, the following changes occur in flower :

Question 17.
Examine a few flowers of any cucurbit plant and try to identify the staminate and pistillate flowers. Do you know any other plant that bears unisexual flowers?
Solution:
In the staminate flowers stamens are present, but pistils are absent. They cannot produce fruits. In the pistillate flower, pistils are present, but stamens are absent and produces fruits. The example of unisexual flowers are – papaya and date palm.