Question 5. 2. A pebble of mass 0.05 kg is thrown vertically upwards. Give the direction and magnitude of the net force on the pebble,
(a) during its upward motion, .
(b) during its downward motion,
(c) at the highest point where it is momentarily at rest. Do your answers change if the pebble was thrown at an angle of 45° with the horizontal direction 1 Ignore air resistance.
Answer: (a) When the pebble is moving upward, the acceleration g is acting downward, so the force is acting downward is equal to F = mg = 0.05 kg x 10 ms-2 = 0.5 N.
(b) In this case also F = mg = 0.05 x 10 = 0.5 N. (downwards).
(c) The pebble is not at rest at highest point but has horizontal component of velocity. The direction and magnitude of the net force on the pebble will not alter even if it is thrown at 45° because no other acceleration except ‘g’ is acting on pebble.

Question 5. 6. A constant force acting on a body of mass 3.0 kg changes its speed from 2.0 ms-1 to 3.5 ms-1 in 25 s. The direction of the motion of the body remains unchanged. What is the magnitude and direction of the force?
Answer:

Question 5. 7. A body of mass 5 kg is acted upon by two perpendicular forces 8 N and 6 N. Give the magnitude and direction of the acceleration of the body.
Answer: Question 5. 12. A bob of mass 0.1 kg hung from the ceiling of a room by a string 2 m long is set into oscillation.
The speed of the bob at its mean position is 1 ms-1. What is the trajectory of the bob if the string is cut when the bob is (a) at one of its extreme positions, (b) at o its mean position ? 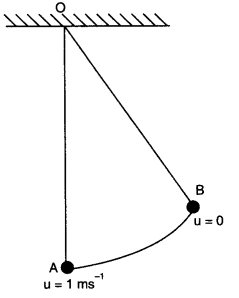 Answer:  Let the bob be oscillating as shown in the figure.
(a) When the bob is at its extreme position (say B), then its velocity is zero. Hence on cutting the string the bob will fall vertically downward under the force of its weight F = mg.
(b) When the bob is at its mean position (say A), it has a horizontal velocity of v = 1 ms-1 and on cutting the string it will experience an acceleration a = g = 10 ms-2 in vertical downward direction. Consequently, the bob will behave like a projectile and will fall on ground after describing a parabolic path. 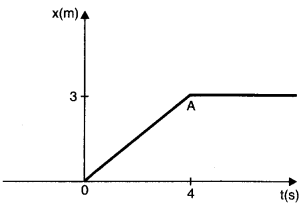 Question 5. 15. Two bodies of masses 10 kg and 20 kg respectively kept on a smooth, horizontal surface are tied to the ends of a tight string. A horizontal force F = 600 N is applied to (i) A, (ii) B along the direction of string. What is the tension in the string in each case?
Answer:

Question 5. 16. Two masses 8 kg and 12 kg are connected at the two ends of a light in extensible string that goes over a friction less pulley. Find the acceleration of the masses, and the tension in the string when the masses are released.
Answer: Negative sign shows that v1 and v2 are in opposite directions.

Negative sign indicates that the gun moves in a direction opposite to the direction of motion of the bullet.

Question 5. 20. A batsman deflects a ball by an angle of 45° without changing its initial speed which is equal to 54 km/h. What is the impulse imparted to the ball? (Mass of the ball is 0.15 kg.)
Answer:

Question 5. 21. A stone of mass 0.25 kg tied to the end of a string is whirled round in a circle of radius 1.5 m with a speed of 40 rev./min in a horizontal plane. What is the tension in the string? What is the maximum speed with which the stone can be whirled around if the string can withstand a maximum tension of 200 N?
Answer:

Question 5. 23. Explain why
(a) a horse cannot pull a cart and run in empty space,
(b) passengers are thrown forward from their seats when a speeding bus stops suddenly,
(c) it is easier to pull a lawn mower than to push it,
(d) a cricketer moves his hands backwards while holding a catch.
Answer: (a) A horse by itself cannot move in space due to law of inertia and so cannot pull a cart in space.
(b) The passengers in a speeding bus have inertia of motion. When the bus is suddenly stopped the passengers are thrown forward due to this inertia of motion.
(c) In the case of pull, the effective weight is reduced due to the vertical component of the pull. In the case of push, the vertical component increases the effective weight.
(d) The ball comes with large momentum after being hit by the batsman. When the player takes catch it causes large impulse on his palms which may hurt the cricketer. When he moves his hands backward the time of contact of ball and hand is increased so the force is reduced.

Question 5. 24. Figure shaws the position-time graph of a particle of mass 0.04 kg. Suggest a suitable physical context for this motion. What is the time between two consecutive impulses received by the particle ? What is the magnitude of each impulse?
Answer: This graph can be of a ball rebounding between two walls situated at position 0 cm and 2 cm. The ball is rebounding from one wall to another, time and again every 2 s with uniform velocity. Question 5. 25. Figure shows a man standing stationary with respect to a horizontal conveyor belt that is accelerating with 1 ms-2. What is the net force on the man ? If the coefficient of static friction , between the man’s shoes and the belt is 0.2, up to what acceleration of the belt can the man continue to be stationary relative to the belt? (Mass of the man = 65 kg.) Question 5. 26. A stone of mass m tied to the end of a string is revolving in a vertical circle of radius R. The net force at the lowest and highest points of the circle directed vertically downwards are: (choose the correct alternative).

Question 5. 29. Ten one rupee coins are put on top of one another on a table. Each coin has a mass m kg. Give the magnitude and direction of
(a) the force on the 7th coin (counted from the bottom) due to all coins above it.
(b) the force on the 7th coin by the eighth coin and
(c) the reaction of the sixth coin on the seventh coin.
Answer: (a) The force on 7th coin is due to weight of the three coins lying above it. Therefore,
F = (3 m) kgf = (3 mg) N
where g is acceleration due to gravity. This force acts vertically downwards.
(b) The eighth coin is already under the weight of two coins above it and it has its own weight too. Hence force on 7th coin due to 8th coin is sum of the two forces i.e.
F = 2 m + m = (3 m) kg f = (3 mg) N The force acts vertically downwards.
(c) The sixth coin is under the weight of four coins above it.
Reaction, R = – F = – 4 m (kg) = – (4 mgf) N Minus sign indicates that the reaction acts vertically upwards, opposite to the weight.

Question 5. 30. An aircraft executes a horizontal loop at a speed of 720 km/h with its wings banked at 15°. What is the radius of the loop?
Answer:

Question 5. 31. A train runs along an un banked circular track of radius 30 m at a speed of 54 km/h. The mass of the train is 106 kg. What provides the centripetal force required for this purpose the engine or the rails? What is the angle of banking required to prevent wearing out of the rail?
Answer:

Question 5. 32.  A block of mass 25 kg is raised by a 50 kg man in two different ways as shown in Fig. What is the action on the floor by the man in the two cases? If the floor yields to a normal force of 700 N, which mode should the man adopt to lift the block without the floor yielding? 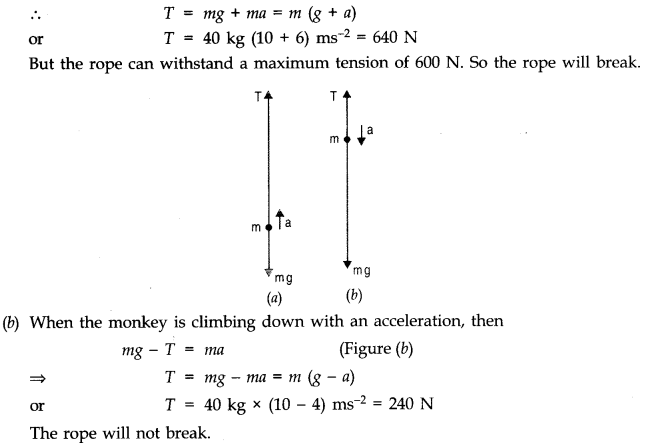 Question 5. 34. Two bodies A and B of masses 5 kg and 10 kg in contact with each other rest on a table against a rigid wall (Fig.). The coefficient of friction between the bodies and the table is 0.15. A force of 200 N is applied horizontally to A. What are (a) the reaction of the partition (b) the action-reaction forces between A and B? What happens when the wall is removed? Does the answer to (b) change, when the bodies are in motion? Ignore the difference between μs and μk. Answer: (i) When the wall exists and blocks A and B are pushing the wall, there can’t be any motion i.e., blocks are at rest. Hence,
(a) reaction of the partition = – (force applied on A) = 200 N towards left.
(b) action-reaction forces between A and B are 200 N each. A presses B towards right with an action force 200 N and B exerts a reaction force on A towards left having magnitude 200 N.
(ii) When the wall is removed, motion can take place such that net pushing force provides the acceleration to the block system. Hence, taking kinetic friction into account, we have Question 5. 35. A block of mass 15 kg is placed on a long trolley. The coefficient of static friction between the block and the trolley is 0.18. The trolley accelerates from rest with 0.5 ms-1 for 20 s and then moves with uniform velocity. Discuss the motion of the block as viewed by (a) a stationary observer on the ground, (b) an observer moving with the trolley.
Answer:  (a) Force experienced by block, F = ma = 15 x 0.5 = 7.5 N Force of friction,Ff= p mg = 0.18 x 15 x 10 = 27 N. i.e., force experienced by block will be less than the friction.So the block will not move. It will remain stationary w.r.t. trolley for a stationary observer on ground.
(b) The observer moving with trolley has an accelerated motion i.e., he forms non-inertial frame in which Newton’s laws of motion are not applicable. The box will be at rest relative to the observer.

Question 5. 36. The rear side of a truck is open and a box of 40 kg mass is placed 5 m away from the open end as shown in Fig. The coefficient of friction between the box and the surface below it is 0.15. On a straight road, the truck starts from rest and accelerates with 2 ms-2. At what distance from the starting point does the box fall off the truck? (Ignore the size of the box). Question 5. 37. A disc revolves with a speed of 33 1/3  rpm and has a radius of 15 cm. Two coins are placed at 4 cm and 14 cm away from the centre of the record. If the coefficient of friction between the coins and record is 0.15, which of the coins will revolve with the record?
Answer: If the coin is to revolve with the record, then the force of friction must be enough to provide the necessary centripetal force. Question 5. 38. You may have seen in a circus a motorcyclist driving in vertical loops inside a ‘death well’ (a hollow spherical chamber with holes, so the spectators can watch from outside). Explain clearly why the motorcyclist does not drop down when he is at the uppermost point, with no support from below. What is the minimum speed required at the uppermost position to perform a vertical loop if the radius of the chamber is 25 m?
Answer: When the motorcyclist is at the highest point of the death-well, the normal reaction R on the motorcyclist by the ceiling of the chamber acts downwards. His weight mg also acts downwards. These two forces are balanced by the outward centrifugal force acting on him.

Question 5. 39. A 70 kg man stands in contact against the inner wall of a hollow cylindrical drum of radius 3 m rotating about its vertical axis with 200 rev/min. The coefficient of friction between the wall and his clothing is 0.15. What is the minimum rotational speed of the cylinder to enable the man to remain stuck to the wall (without falling) when the floor is suddenly removed?
Answer: